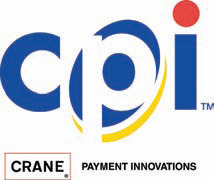 Crane Payment Innovations (CPI) is based in Malvern, Pennsylvania. CPI is a Silver member of AGEM, and was formed when Crane Co., a diversified manufacturer of highly engineered industrial products (NYSE:CR), acquired MEI and merged it with the payment solutions division of their payment and merchandising technologies business segment. CPI legacy brands now include CashCode, Conlux, MEI, Money Controls, NRI and Telequip. As a result, CPI offers the single most comprehensive portfolio of payment systems in the industry, everything from coin and note devices (spanning hoppers, acceptors and recyclers) to cashless systems and asset management software. It’s all accompanied by a team of experts who can help ensure the most proficient selection and application of CPI products into complete cash management solutions.

A commitment to continuous improvement rests at the heart of CPI’s success. Accordingly, CPI is focusing resources to expand the functionality of its Easitrax asset management system.  First, CPI will be introducing a Maintenance Alerts feature that allows operators to set performance thresholds, receive proactive maintenance notifications and, ultimately, identify problems even before they occur. CPI will also introduce functionality that makes Easitrax applicable to route operators—providing the ability to manage accounting and performance on both micro (site) and macro (network) levels.

CPI is more than just a supplier; CPI is a global partner in cash management with a goal is to help customers become more profitable and efficient by continually expanding the value they can receive from automated payment systems.

In the first quarter of 2016, CPI will be attending ICE Totally Gaming (booth N3-320), AHG, NIGA and ENADA Spring.

AGEM KEY BOARD OF DIRECTORS ACTIONS

• In preparation for the Bermuda Casino Gaming Commission awarding up to three casino licenses, it has approached AGEM to assist with writing new regulations that would govern suppliers in the market. AGEM members approved a $30,000 contribution in support of the development of these “best practice” regulations that could serve as a unique model of industry cooperation and possibly reduce the regulatory burden on suppliers.

• After an 18-month process, Nevada bill SB9 technical standards, governing variable-payback slots that allow for skill-based gaming and other new features, became final on January 25. This gives game developers the framework they need to create new types of skill-based games. It was the first time AGEM has worked so closely with the Nevada Gambling Commission and regulators on something of this scale, which will undoubtedly have wide-ranging benefits for the industry.

• AGEM welcomed two new members to the group in the January meeting, bringing the total membership count to 149. GameCo, based in New York City, was voted in as a Bronze member, and Media Resources International as an Associate member.

Members recently voted to support three very worthy corporations with donations of $5,000 each. The Go Red For Women luncheon will be held on February 25 in Las Vegas, supporting funding for research battling heart disease, which is the No. 1 killer of women in the U.S.; the Western Indian Gaming Conference, being held at Harrah’s Southern California, February 9-11; and the Midwest Conference on Problem Gambling and Substance Abuse, June 22-24 in Kansas City.

The gaming equipment manufacturing sector posted a positive performance in 2015, as the AGEM Index improved by 15.47 points (+8.5 percent) year-over-year to 197.32, which represents the third consecutive month of year-over-year growth. Compared to November 2015, the index reported an increase of 2.99 points (+1.5 percent) in the final month of the year. In December, six of the 14 global gaming equipment manufacturers reported month-to-month gains in stock price, with one up by nearly 15 percent. Of the eight manufacturers reporting declines in stock price during the month, five were down by 5 percent or more, with two down by 10 percent or more. 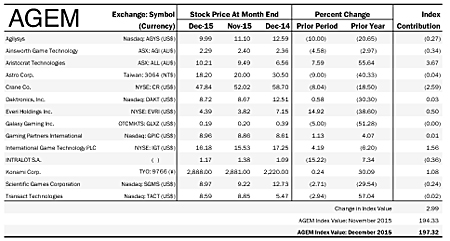 AGEM is an international trade association representing manufacturers of electronic gaming devices, systems, and components for the gaming industry. The association works to further the interests of gaming equipment manufacturers throughout the world. Through political action, trade show partnerships, information dissemination and good corporate citizenship, the members of AGEM work together to create benefits for every company within the organization. Together, AGEM and its member organizations have assisted regulatory commissions and participated in the legislative process to solve problems and create a positive business environment.