AGEM Board of Directors Actions for September 2021

The AGEM Index increased by 87.57 points to an all-time high of 1,012.89 points in August 2021, a 9.5 percent gain from July 2021. In the last month, nearly all AGEM Index companies reported increases in stock price, with 10 posting positive contributions and two recording a negative contribution to the index. Compared to the prior year, the AGEM Index was up 109.9 percent, more than doubling from the 530.38-point level in August 2020. The AGEM Index’s August 2021 growth was due in large part to a 9.7 percent increase in the stock price of Aristocrat Leisure Limited (ASX: ALL), which rose from $41.64 to $45.67. The stock was responsible for a 26.73-point increase in the AGEM Index’s monthly growth. Other significant index contributors were Konami Corp. (TYO: 9766), which added 21.64 points due to a 14.7 percent rise in stock price, and Scientific Games Corporation (NASDQ: SGMS), which contributed 21.45 points with a 17.2 percent stock price increase. The major stock indices also performed well over the month as the Nasdaq and the S&P 500 experienced monthly gains of 4.5 percent and 3.2 percent, respectively, while the Dow Jones Industrial Average grew by 1.2 percent. 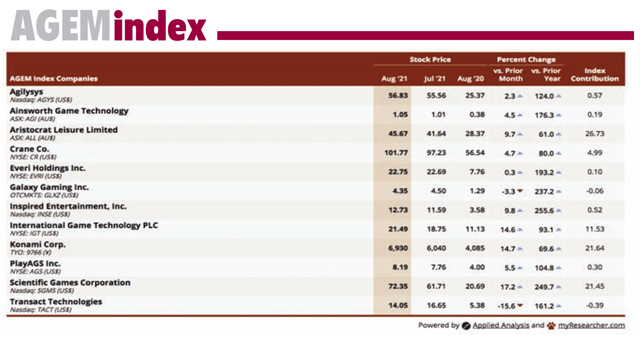