The Association of Gaming Equipment Manufacturers released results of a comprehensive economic impact study of the gaming manufacturer technology sector. 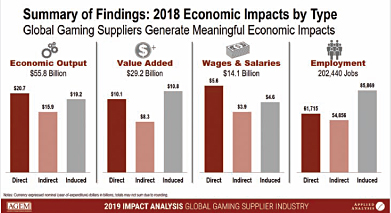 The global gaming supplier industry generated a total economic impact of $55.8 billion, supported more than 202,000 employees, including 61,700 direct employees, and supported a total of $14.1 billion in wages and salaries during 2018, according to a comprehensive report released by the Association of Gaming Equipment Manufacturers (AGEM).

The report, titled “Impact Analysis: Global Gaming Supplier Industry,” was the result of an independent study commissioned by AGEM and conducted by the respected Nevada-based research firm Applied Analysis. The report reflects a recurring update and the most comprehensive review to date of the global gaming supplier industry that analyzes the size and scope of this technology-driven sector, specifically identifying AGEM members’ global reach spanning every regulated gaming market in the world.

Among the highlights of the report, results showed that including direct ($20.7 billion), indirect ($15.9 billion) and induced ($19.2 billion) impacts, the global gaming supplier segment generated a total of $55.8 billion of economic output (revenue) in 2018.

The average direct wage per employee in the industry reached approximately $91,240 in 2018, reflecting a significant premium to the current U.S. average annual wage of $51,960, as listed by the Bureau of Labor Statistics.

The industry has an especially strong impact in Nevada and overall employs a broad range of workers, including high-end technical professionals and engineers responsible for hundreds of millions of dollars in research and development expenditures annually.

“Existing suppliers are growing and new players are entering the space, and this report accurately reflects a dynamic sector that is focused on innovation for gaming markets throughout the world,” said Marcus Prater, executive director of AGEM. “In summary, the report paints a picture of a healthy overall gaming industry where commercial casinos and tribal properties are capitalizing on advanced technologies and game content from a vast array of creative suppliers to grow their business while providing their customers with new and exciting forms of entertainment.”