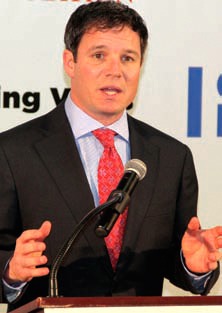 In a recent conference call with reporters, Geoff Freeman, president and chief executive officer of the American Gaming Association, discussed the organization’s aggressive agenda for the near future, including gaining more security funding for Las Vegas and opposing the Internal Revenue Service’s proposal to lower jackpot reporting amounts. Freeman also said the AGA will add 11 new members to help unify the gaming industry.

Freeman said he sent a letter to the Nevada congressional delegation in early March, noting the Department of Homeland Security’s Urban Areas Security Initiative “does not adequately take into consideration Las Vegas’ unique profile as a major international travel destination.”

Also, Freeman said “the industry is aligned” in opposing the Internal Revenue Service’s proposal to lower from $1,200 to $600 the amount required for reporting a slot player’s name, address and Social Security number, to assure taxes are paid on the jackpot.

Freeman said the idea “seemed to come a bit out of left field” as Washington seeks “new revenue through creative thinking.” He noted the reporting threshold had not been reviewed since Jimmy Carter was president and Saturday Night Fever was on the screen.

In addition, Freeman said the AGA is adding 11 new members, including Ho-Chunk Gaming of Wisconsin, the group’s second tribal member after Seminole Hard Rock Gaming, announced in January when nine new members were added. “Bringing this industry together is one of the absolute most important things we can do. These new members make our organization, and the gaming industry, even stronger,” Freeman stated. “The budding coalescence of the gaming industry and wave of interest in the AGA strengthens our ability to share gaming’s story and effectively advocate in Washington, state capitals and developing gaming markets around the globe.”