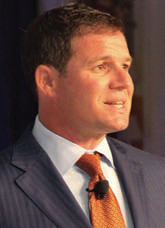 It was a busy December for the American Gaming Association, with three new and updated initiatives being released.

Two weeks ahead of a Republican presidential debate in Las Vegas, the American Gaming Association issued a questionnaire to all 2016 presidential candidates that will inform a voter guide compiled by AGA and distributed to nearly 1 million gaming employees across 40 states.

The questionnaire is the latest effort as part of the industry’s ongoing, first-ever “Gaming Votes” initiative to educate presidential candidates about the nation’s $240 billion casino gaming industry, and to inform gaming employees about where the candidates stand on key issues. Casino gaming supports more than half a million jobs and contributes $75 billion to local communities in early voting and battleground states.

“Before casting their vote, gaming employees need to know where candidates stand on their industry and the most important issues we face,” said Geoff Freeman, president and CEO of the AGA. “While candidates have no shortage of issues to consider and debate, we encourage candidates to take the time to demonstrate their support—through this questionnaire, a back-of-the-house tour and in other ways—for an industry that is creating a path to the middle class for workers of all backgrounds and experiences.”

In another development, the AGA has updated its anti-money laundering “Best Practices” list to instill a strong culture of compliance, robust assessment of money laundering risks and federal suggestions, and improve employee training.

“Our industry’s commitment to a culture of compliance is stronger than ever, and our updated Best Practices ensure that casinos of all sizes are protecting themselves and America’s national security,” Freeman said. “We will continue to bolster these Best Practices, adapt to evolving threats and incorporate guidance from FinCEN and other regulators who share our goal of preventing illicit activity from occurring at gaming properties.”

The AGA’s updated Best Practices suggest a more targeted and extensive assessment of money laundering risks that is focused on the various aspects of a casino, including gaming floor activity, race and sports book activity, cage-focused activity, and information from the back of the house.

And in the wake of the recent terror attack in San Bernardino, the American Gaming Association called for passage of federal legislation strengthening homeland security while maintaining an efficient entry process for international visitors.

The gaming association joined others in supporting passage of H.R. 158, which would create the Visa Waiver Improvement Act of 2015, which requires international visitors to provide fraud-resistant passports and check passengers against lists of known or suspected terrorists.

“On behalf of the 14.6 million American workers whose livelihood depends on safe international travel to the United States, we are writing in support of H.R. 158, legislation to strengthen homeland security in the wake of the recent terrorist attacks,” the AGA wrote in a letter to federal lawmakers. “The horrific attacks in Paris underscore the need for every possible measure to protect public safety. And no one advocates for security precautions more vigorously than travel professionals. Without public confidence in air security, worldwide commerce will be crippled.”

The association says the proposed visa waiver program is “one of the most effective tools against global terror,” and the U.S. now has “unparalleled authority to inspect their counter-terrorism, border control, aviation and travel document security methods and facilities.”

The measure has bipartisan support, including support from members of the Congressional Gaming Caucus.