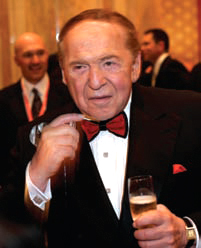 It’s only been about five years since Las Vegas Sands joined the American Gaming Association, but that relationship seems to be in conflict as LVS Chairman Sheldon Adelson has launched a scorched-earth campaign against online gaming, which a majority of the AGA board supports.

In an extensive article in the Washington Post, LVS executives explained Adelson’s motives.

“In my 15 years of working with him, I don’t think I have ever seen him this passionate about any issue,” said LVS VP of Government Affairs Andy Abboud.

When Global Gaming Business was the first source to directly quote Adelson about his opposition to online gaming early in 2012, it was an open secret in the gaming business. LVS had no plans and no aspirations to enter the online gaming industry.

In an article in Forbes magazine in November, Adelson explained why he’s launching this campaign.

“My moral standard compels me to speak out on this issue because I am the largest company by far in the industry and I am willing to speak out,” he said. “I don’t see any compelling reason for the government to allow people to gamble on the internet and nobody has ever explained except for the two companies whose special interest is going to be served if there is gaming on the internet, Caesars and MGM.”

Even though he named the companies most involved in the online gaming push, Adelson denied that he is attacking them.

So Adelson has established a full-bore campaign in Congress to get a law passed that would ban online gaming in the U.S. The Coalition to Stop Internet Gambling will get an official rollout in January with personal visits from Adelson to congressional offices.

The new president of the American Gaming Association, Geoff Freeman, is walking a tightrope. He wants to expand the influence and membership of the AGA while retaining the influence—and the revenue—of the organization’s powerful members, LVS included.

In a statement, Freeman explained the AGA’s position.

“Time and again, government efforts to prohibit use of everyday products have failed,” he said. “In 2012, Americans spent nearly $3 billion gambling with rogue offshore operators. The internet cannot be forced back into the bottle—nor can market demand. We support pragmatism and strong regulation of online gaming that protects consumers, prevents underage play, ensures the integrity of the games and empowers law enforcement.