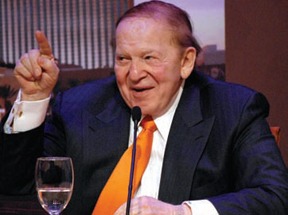 In an interview with Global Gaming Business magazine last year, Las Vegas Sands Chairman and CEO Sheldon Adelson publicly said for the first time that he opposed online gaming for a variety of reasons. A few months later, he told the American Gaming Association that he would oppose any federal bill that legalized online gaming, although he may not actively lobby against it.

He said he is “adamantly opposed to the legalization and proliferation of online casino gaming,” and that he sees the activity as “a societal train wreck waiting to happen.”

He estimates that the impact on land-based gaming in the U.S. could be substantial. He compares the loss of business by the European land-based casinos with the U.S.

“Recent research from a number of European countries shows that the proliferation of internet gaming has, as a start, resulted in a 20 percent decrease in visitation to the land-based casinos in those countries,” Adelson wrote.

“What does that information foretell for us here in the United States? To begin with, a loss of 200,000 direct gaming industry jobs and additional 200,000 lost indirect and induced jobs. That’s

He went on to warn about greater damage to society as a whole.

“The possibility of underage children finding ways to place online wagers and the possibility of people betting under the influence of drugs or being coerced are all scenarios that can happen when the person is only monitored by their own computer screen,” he says. “On the other hand, when a person makes an effort to get dressed, join some friends and head to the local casino for a night of entertainment they must show themselves as adults, and their behavior can be observed and ultimately managed by security and other staff if needed.”

“Mr. Adelson,” he says, “is staging a very belated and unimaginative rear-guard action.”

Owens particularly points at errors in Adelson’s thinking about online gambling addictions. He points to many studies, particularly one by the Harvard Medical School, that show the problem gambling rate online is almost exactly that of land-based gamblers—less than 2 percent, a finding confirmed by a separate study by the state of California.