Three casinos close within two weeks, with the Taj Mahal to follow 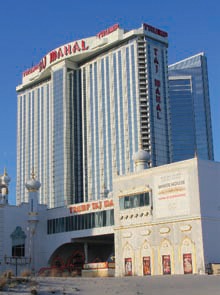 A third casino—Trump Plaza—closed September 16, costing the resort more than 6,000 jobs in total.

But all that was expected and announced months ago. What shocked the industry and the city was word that Trump Taj Mahal would also close down. Trump Entertainment Resorts, which still operates the Taj Mahal in the city, filed for bankruptcy protection for that casino in early September and send out WARN notices to its 2,825 employees on September 9 saying the casino could close down within 60 days.

Trump Entertainment Resorts has more than $280 million in debt secured by the two Trump casino hotels—Trump Plaza and the Taj—according to a recent filing with state regulators, with assets of less than $50,000.

Trump Taj Mahal also indicated in a quarterly report released in August that a restructuring could be on the horizon. The company said “significant revenue increases and improvements in its operating results” are needed.

According to another report in the New York Post, there was hope that Carl Icahn, who owns much of the Trump Entertainment debt and mortgages on both Trump properties, would agree to convert that debt into equity and keep the casino out of bankruptcy, but that hope has faded.