No easy answers to off-reservation gambling 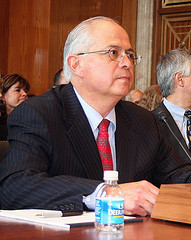 When the Obama administration announced in June it was rescinding a U.S. Department of Interior memorandum limiting American Indian tribes from developing casinos outside reservation borders, many envisioned a modern land rush for tribal gambling ventures.

“The immediate impact will be a resuscitation of projects that people thought were dead,” said John Tahsuda, principal of Navigators Global, a Washington, D.C., lobbying group. “All those projects are going to be dragged back out. There’s going to be more speculation, more arbitrage; people will be desperate for new deals. It’s a new day.”

But Tahsuda and others are skeptical there will, indeed, be a plethora of successful tribal casino projects as a result of the shift in Interior policy on off-reservation gambling.

But there remain stringent federal laws under Section 20 of the Indian Gaming Regulatory Act of 1988 that greatly restrict existing tribes, newly recognized tribes and landless tribes from acquiring trust lands for new casinos.

The significance of the Echo Hawk announcement, however, is the fear among many tribes that it will add fuel to a growing public and congressional backlash against Indian governments based largely on the perception—however unfounded—that there will be an unchecked, unregulated spread of tribal casinos beyond existing reservations.

There also is the gnawing concern that Interior’s announcement will inflame casino critics such as Senator Dianne Feinstein (D-California), who last year was at least partially blamed for scuttling a congressional “fix” to a 2009 U.S. Supreme Court ruling that limits the ability of Interior to place land in trust for tribes not “under federal jurisdiction” in 1934.

A congressional remedy to the court’s ruling in Carcieri v. Salazar ranks at the top of Native Americans’ political agenda. And it rankles indigenous governments that Interior action on as many as 1,900 land/trust applications—only 30 of which involved casinos—is being slowed to a crawl because the issue in the eyes of Congress is being framed as one involving off-reservation gambling.

“That’s the 10,000-pound gorilla sitting in the room with all of this,” said Joe Valandra, former chief of staff for the National Indian Gaming Commission.

“Tribes have been trying to separate gaming from the land/trust issue,” Tahsuda told GamblingCompliance. “It’s difficult because politically the two issues get intertwined.”

Echo Hawk’s announcement on off-reservation casinos, Tahsuda said, was tantamount to “throwing gas on the fire.”

The controversy surrounding off-reservation gambling is proving extremely divisive to Native America, pitting tribes against tribes on issues of competition, encroachment of ancestral lands and, perhaps most important, the nagging fear the public will soon no longer regard tribes as sovereign governments and indigenous, culturally rich communities, but greedy purveyors of casinos.

“We’re losing our narrative,” said Tom Rodgers, a Montana Blackfeet and principal of Carlyle Consulting of Alexandria, Virginia. “Once we’ve lost that, we’ve lost it all.”

“Feds ditch rule that foiled Indian tribes’ plans for off-reservation casino in Catskills,” the Washington Post wrote of gambling resort aspirations by the St. Regis Mohawks of northern New York and the Stockbridge Munsee Band of Mohican Indians of Wisconsin.

“Wisconsin Indian tribes like federal rule change on casino sites,” wrote the Beloit Daily News of previously rejected plans by the Menominee Indian Tribe of Wisconsin to open a casino in Kenosha, 200 miles southeast of its reservation.

“Luck could change for Choctaw casino in Jackson County,” the Biloxi Sun Herald wrote of efforts by the Mississippi Band of Choctaw Indians to establish a hotel-casino 140 miles south of its reservation headquarters in Philadelphia.

“Jemez Pueblo benefits from change in off-reservation gaming,” Indianz.com wrote of plans by the New Mexico pueblo to build a casino resort 300 miles away on the Texas border.

Those and other projects drew new breath with Echo Hawk’s announcement.

“The 2008 guidance memorandum was unnecessary and was issued without the benefit of tribal consultation,” Echo Hawk said in a speech before the National Congress of American Indians. “We will proceed to process off-reservation gaming applications in a transparent manner, consistent with existing law.”

• get approval from the state governor;

• show that the project is “in the best interest of the tribe and is not detrimental” to the surrounding community or other Indian tribes; and

• enter into a tribal-state gambling agreement, or compact.

The fallout from Echo Hawk’s announcement was immediate, as the headlines attest.

Senator Charles Schumer (D-N.Y.), who lobbied Interior on behalf of the St. Regis Mohawk tribe, said the commutability rule was an “insurmountable hurdle” for the Catskills casino, which he contends will generate jobs and state revenue.

But Feinstein called the new policy “a disaster for Californians who may face an unwelcome casino in their community.”

Feinstein and Senate Minority Leader Jon Kyl (R-Arizona) are sponsoring legislation to require tribes seeking off-reservation casinos to establish ancestral and modern ties to land placed in trust for casinos. Feinstein’s threat to introduce the legislation last year was partially blamed for derailing attempts to get a Carcieri fix through Congress.

Perhaps sensitive to the backlash, Echo Hawk told the Associated Press not to read too much into his statement.

“I don’t think anyone should be looking at this as if now we’ve opened the gates and we’re going to start approving casinos at great distances,” Echo Hawk said.

“You might say it’s a relatively steep hill to climb,” Echo Hawk said of existing regulations and department policy on off-reservation gambling. “It says in the regulations the farther you go from the reservation, the greater the scrutiny.”

“Nothing has been implied other than the 2008 guidance is now out of the way,” Valandra said of Interior’s decision to rescind the Bush memorandum. “We don’t know what the impact on the process will be. There’s been no promise of action, only a promise the policy has changed.”

Because approval from a state governor is necessary and acceptance by local communities strongly recommended if an off-reservation casino proposal is to survive Interior’s politically charged bureaucracy, most of the more distant off-reservation proposals face an uncertain future.

The Catskills projects and attempts by the newly recognized Shinnecock Indians of Long Island to establish one or more off-reservation casinos have a measure of political and local support. The Mississippi Choctaws face insurmountable opposition from Governor Haley Barbour and local officials in Jackson County, not to mention the state and local press and a thriving commercial casino industry in neighboring Harrison and Hancock counties.

Rodgers, who represents a number of tribes, believes existing federal laws are sufficient in regulating the spread of tribal casinos.

Incidents of new tribal casinos off existing reservations are rare, he said, and the outcry for new regulations is tantamount to “a solution in search of a problem.”

It’s All In A Name

The issue is complicated in part because the term “off-reservation” gambling is misunderstood by the press, public and Congress.

IGRA generally limits casinos to tribes under federal recognition in 1988, when the act was passed into law. There are currently some 446 casinos operated by 229 tribal governments.

Tribal leaders, lawyers and lobbyists and Interior officials note there have only been five cases where established tribes used a “two-part determination” exemption in IGRA to build casinos off existing reservations, a process requiring approval from state governors, federal environmental review and input from local communities.

But additional casinos have been developed under IGRA by newly recognized and landless tribes, and as a result of congressional action and tribal land claims. Some three dozen established, landless and newly recognized Indian tribes have proposed casino projects, all of which are being lumped into the “off-reservation” category. Many of them are controversial.

Feinstein’s anti off-reservation/Carcieri fix fervor was ignited by the Lytton Band of Pomo Indians, which operates a Class II, bingo-style casino in San Pablo, near San Francisco in Feinstein’s congressional district. Lytton’s federal recognition was restored in 1991, and by law, the tribe is precluded from operating a casino on its ancestral lands in Sonoma County.

Some 17 California tribes have Indian-lands designation applications pending with the Bureau of Indian Affairs, including the Scotts Valley Band of Pomo Indians and Guidiville Rancheria, both in Feinstein’s district.

The Cowlitz Indian Tribe of Washington state secured formal acknowledgment as a federally recognized tribe in 2000, and is developing a casino on its new 150-acre reservation in Clark County, Washington.

Cowlitz and 13 other tribes seeking land in trust are facing court action and Interior Department appeals as a result of the high court ruling in Carcieri v. Salazar, which creates legal obstacles for tribes unable to show they were under federal jurisdiction when the Indian Reorganization Act was enacted in 1934.

The ruling “is having far-reaching consequences and potentially devastating impacts” on the ability of Indian governments to obtain land in trust for economic development and services to tribal citizens, John Echohawk, executive director of the Native American Rights Fund and brother of Larry Echo Hawk, told a June 23 session of the Senate Committee on Indian Affairs.

Most Arizona tribes object to the Tohono O’odham efforts to establish an off-reservation casino in the Phoenix suburbs, contending it would violate the tribal-state compact and encroach on the ancestral lands of the Gila River and St. River-Pima Indian communities.

Most tribes applaud Echo Hawk’s decision to rescind the 2008 off-reservation memorandum, which was implemented by an anti-Indian Bush administration without consultations with the tribes. But the same tribes are uncomfortable with the expansion of Indian gambling off existing reservations.

Aboriginal Homelands, which includes such politically powerful gambling tribes as the San Manuel Band of Mission Indians and Pechanga Band of Luiseño Indians of California, the Mashantucket Pequot and Mohegan tribes of Connecticut and Gila River.

San Manuel has been fighting attempts by California tribes to establish off-reservation casinos in Barstow, on the aboriginal lands of the Serrano, ancestors of citizens of San Manuel.

“We seem to have forgotten it is our cultural sovereignty that gave rise to tribal government gaming, that the economic, legal and political success tribal nations enjoy today rests squarely on the bedrock of inherent cultural sovereignty,” said San Manuel Chairman James Ramos.

“Our cultural sovereignty, including our aboriginal lands, should never be dismissed in favor of economic plans that benefit developers who prey on desperate tribes and non-tribal communities seeking economic development.”

The National Indian Gaming Association, the tribal gambling industry lobby and trade group, has stayed suspiciously silent on the off-reservation issue, particularly with tribes blaming casinos for the inability to get a Carcieri fix.

“I feel for Mark,” a Capitol Hill lobbyist said of NIGA Executive Director Mark Van Norman. “He’s trying to keep 183 tribes together, working for the same set of principles. That’s not easy.”

The National Congress of American Indians and United South and Eastern Tribes have taken the lead in the lobby effort for a Carcieri fix, shoving NIGA with its financial resources and political clout to the background, fearful tribal gambling will scuttle the effort.

Perhaps the greater fear was expressed by longtime tribal activist Ron Allen, chairman of both the Jamestown S’Klallam Tribe and Washington Indian Gaming Association, who said during the recent NIGA elections that off-reservation gambling was creating disunity and changing indigenous traditional beliefs about the land.

“Gaming in Indian country has changed our political and cultural values,” Allen said. “Historically, we have always been united and moved forward collectively to protect our sovereignty, our tribal governmental rights, and the interests of our communities.

“Now we have changed. We have adopted the white cultural values and use legal techniques to prevent other tribes from participating in gaming, to prevent loss of market. ‘There’s not enough room on this bench for the both of us.’ Well, historically there always was.

“Aboriginal territory overlapped, substantially. Today they’ve adopted the mentality of a fence, separating territory. There never was a fence before.