Can the Asian gaming boom be sustained? Part I - China & Macau 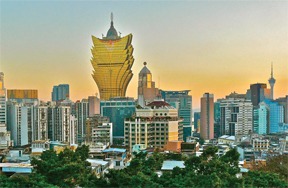 The exponential growth in the Asian gaming market has been the industry’s leading story this decade, with Macau serving as the most important model of that expansion. The Cotai region of reclaimed land is currently the most popular gambling destination in Macau, which is located on the heel of China’s southern coast. Macau is the only place in the country where casino gambling is legal. The SAR’s billion in revenue last year was more than six times higher than the Las Vegas Strip.

“It is not so much that foreign markets overlook Asia, but more about their inability to get beyond certain perceptions and inhibitions,” says Dean

Macomber, president of Macomber International, a gaming consultant firm. “To develop, operate and market in Asia takes commitment and courage. For Western operators, most Asian venues are second- and third-world countries where the rules of government, business and even life are different than home, which causes angst and often resistance to invest in Asia or specific venues.”

The influence of the communist government of the People’s Republic of China (PRC) was, is and always will be the elephant in the room when conducting any business with the country. Despite the difference in government structure between China and the Western world, it is vital that all newcomers to the Chinese market avoid trying to duplicate or push Western beliefs, practices or even architectural design.

“The importance of local awareness, requirements and expertise is valuable because there has been an unending stream of rhetoric with the message of ‘educating’ the Chinese on lifestyle issues,” says Ben Lee, a Macau-based consultant in the gaming industry. “We have seen numerous facilities built in the Vegas cookie-cutter style. The gloss of some of these successes has hidden the weaknesses of some of these projects, and one can only surmise how much more profit they would have made had they bothered to do it right in the first place.”

An open mind and the ability and desire to take on risk in the world’s most successful gaming market sounds like an easy task. With the industry’s demographic shift from the West to the East, one expert recommends that Westerners take a page from our pioneering forefathers to maximize their growth potential in Asia.

“It is necessary that businesses take more of a pioneering approach to realize strategically they need to get into Asia to participate in its growth,” says

Macomber. “Like all pioneering efforts there will be risks, but as so many Western businesses have done before them, there are ways for non-gaming companies to enter Asia; it just takes commitment and courage. It is not too far-fetched to forecast that the largest gaming companies will be Asian-centric, if not Asian-owned, in the not-too-distant future.”

Bye-Bye to the Boom?

The question in whether the Asian gaming boom can continue lies in the control and influence of the Chinese government in Macau. Some experts see the installation of cash controls and other non-gaming-revenue-friendly practices as an early warning sign of what is to come. More optimistic gaming industry experts cite the tourism demand to Macau and the mainland’s billion-plus population as natural, built-in protection from negative government influence.

“I believe there will be continued growth in Asia, and that growth will be enjoyed by the casinos in Macau and other regional jurisdictions,” says Andrew M. Klebanow, principal of Gaming Market Advisors. “In many ways, Asia resembles the United States in 1988, when there were only two states that permitted gambling. Granted, many markets in the United States have reached a point of saturation, but it took 25 years to get to that point. Asia will eventually reach a point of saturation, but that time is decades away.”

That anticipated growth will definitely have a trickle-down effect for other countries. Mike Gore has worked in the Cambodian market for the last 15 years and is now general manager of Savan Vegas Entertainment Resort.

“Generally, casino games are increasing in Macau and Malaysia, and online games and sports betting are increasing everywhere in Asia,” he says. “The Asian gaming market boom can definitely be sustained, because of the propensity of Asians to gamble and the continuing increases in regional gross domestic product growth rates. Our forecast is that competition will continue to increase but that regional casino revenues will double within five years.”

In a July interview with CNBC, Sands China President and CEO Edward Tracy expressed great confidence that the recent Chinese economic and regulatory policies will not have a major negative effect on Macau gaming.

“We have not seen any evidence in our fundamental metrics that there is any reason to believe these are earth-shattering policies that will affect our customers in Macau,” he said. “We believe our performance proves that, and in the next six months we feel there will be continued growth in Macau.”

The numbers support Tracy’s confidence, according to Anita Chen, managing director of Park Strategies in Taiwan. Between January and May 2013, Macau’s gambling revenue rose by 14 percent over the same period last year.

It’s undeniable that Macau’s success is directly related to its national government. Visas and operating permits are all a part of the necessary positioning of tourists and businesses to enter the Asian market.

“Macau revenues are largely driven by the PRC, and as it goes, so goes Macau for the foreseeable future,” says Macomber. “In this regard, the further from China a competitive gaming venue opens the less the impact will be. The less ‘friendly’ and convenient the country is, the less likely that the PRC will grant exit visas to PRC residents to gamble there. The more expensive it is to travel, the less likely there will be an impact, and on it goes.”

The Market for Macau

China is in an advantageous position of control when it comes to building relationships with other countries that want access to Macau. The Macau SAR and the Chinese government are each looking for their right opportunities, on their terms, for mutual partnerships to establish and maintain conditions for growth.

“On the demand side, pro-economy, pro-travel, pro-unfettered travel policies will help Macau,” says Macomber. “On the support side, policies that pay attention to infrastructure and other gaming or tourism support will ensure that both keep pace with demand.”

By quickly rebounding from the international economic crisis of 2008 and 2009, a stronger sense of the defined Macau market has led to this confidence displayed by both industry experts and gaming operators alike.

“I do not hold much credence in some experts’ opinion that Macau will experience a significant downturn because of government policy changes,” says Klebanow. “Macau’s performance has defied experts’ opinions time and time again, and recent improvements in gaming revenue over prior-year periods continue to exceed expectations. All trends continue to point to continued growth.”

Klebanow points to the Sands Cotai Central property that has successfully attracted new visitation even though there are minimal shopping amenities and a generic casino theme.

“Its contribution to the Cotai room industry must be noted because it placed a lot of mid-priced room product into the market which was sorely needed,” he says. “Over the next 24 months Macau will see continued benefit from this increased room supply. The 24-to-48-month outlook is very promising, because the new must-see properties will stimulate mass market demand. Add to that improvements in transportation infrastructure and market growth becomes more promising.”

“There is nothing on the medium-term horizon that leads to a conclusion that the market will not grow in response to this increase in supply,” says Klebanow.

More good news occurred for Macau on July 30 when Steve Wynn announced that he will open his first casino resort in Macau’s prime Cotai location earlier than expected, in first-quarter 2016.

The new resort, called the Wynn Palace, will be similar to Wynn’s Bellagio in Las Vegas. The front of the property will feature a massive lake and a light and fire show. Guests will be ferried across the lake in air-conditioned gondolas.

“I feel sanguine and comfortable about being here, and plan on being here a lot longer,” Wynn said on an earnings call.

Wynn Macau has been losing revenue share to Sands and Galaxy Entertainment because Wynn did not have a presence in Cotai. The property’s development budget is $4 billion, and in typical Wynn fashion it will feature unique aspects such as moving floral sculptures of carousel horses, peacocks and tigers. Meanwhile, Wynn Macau is renovating 600 guest rooms in the existing resort that will lead to a 5 percent reduction in rooms, but will be completed at the end of this year.

The competition is unavoidable, and will hopefully raise the stakes to draw even more foreign tourists to Macau. The key is to make sure they are comfortable with the process, because once they arrive, the big lights, glitz and glamour sells itself, whether you are from Hong Kong or Houston.

“From our perspective, any time you have competition there is always reason to have some concern there will be an inflection downward,” Tracy said during his CNBC interview. “But this market has proven that it has the capacity to hold the demand.”

Tracy pointed at the infrastructure improvements in southern China, as well China’s growing wealth class and Sands’ current market penetration rates as reasons to maintain a high level of optimism about Macau’s future.

“Market share is one of the many metrics we monitor,” he said. “But we are more concerned about creating value for our shareholders through net income, which includes non-gaming revenue.”

Non-gaming revenue is becoming a more important resource for Macau every day. Retail, dining, entertainment, sports and nightlife are all key factors in this growth. November’s “Clash in Cotai,” a high-profile boxing match featuring former champion Manny Pacquiao during Thanksgiving weekend, will give China its biggest international sporting platform since the 2008 Beijing Olympics.

“We have a detailed process before we consider hosting any event,” Tracy said during his CNBC interview. “It has to be commercially viable, raise the visibility of Macau as a tourist destination and enhance the value of our brand.”

Sands Macau has put this strategy into play by hosting major concerts, and both boxing and mixed martial arts fights on HBO and Chinese television.

“These kinds of events raise the profile of Macau to the point where we are now a global destination,” Tracy said.

Despite the many levels and opportunities of entering the Macau and Asian gaming markets, the fundamentals of respecting the business, government and personal culture of Asians remain vital for success.

“The biggest story in Asia is getting gaming owners, developers and investors to understand the mid- to long-term necessary strategic value of getting into Asia,” says Macomber. “Then, they have to acquire the commitment and courage to do so.

“In response, the host countries need to understand that they will have to change in certain ways over time in the ways they conduct business and government in order to maximize this potential. The extent either side waffles, balks or does not respond will influence the slowdown or growth accordingly.”