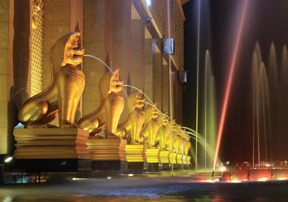 The position of China as the lead country in the foreign gaming industry is undeniable (See “Asian Gaming Boom Part 1,” Global Gaming Business, September 2013). The question that looms over the Chinese is whether their gaming boom will sustain over the long term.

“If the government institutes cash controls that are effective in blocking players from China getting funds to Macau to gamble with, then yes, the worries are well-founded,” says Dean Macomber, president of Macomber International, a gaming consultant firm. “If not, then their worries are not well-founded. One of the values that third-party VIP room and junket reps bring to Macau casino owners and operators is their ability to move cash through the Chinese border.”

The link between China’s banking system and its neighboring countries had been established decades, if not centuries before the gaming boom. But to maintain the boom, a pro-gaming Chinese government is needed.

“Gaming is a leisure-time activity, and therefore exists only after there is leisure time and leisure money to be spent around the world,” says Macomber. “If an economy ebbs toward the leisure-time/spend demarcation line, then gaming dollars tend to shrink. But it also is important to remember that lessening percentages on large bases can still produce the same absolute dollar growth.”

However, the sprawl of the gaming industry has spread throughout Asia, to both southern and eastern regions, including Cambodia, Japan, the Philippines and Taiwan.

“If you are a company in gaming you need to be in Asia,” says Macomber. “Strategically, gaming companies belong in Asia even though it is more risky and the early returns are unlikely to approach Macau or Singapore.”

The Cause for Cambodia

Often overlooked in the Asian gaming boom, Cambodia is a smaller market with a big upside if the current trends continue. Its growth is being seen in the online segment, where operators are experiencing rapid growth, along with the sports betting sector.

“We are seeing an increase with both segments across the board in Cambodia,” says Mike Gore, general manager of Savan Vegas Entertainment Resort. “Most foreign markets overlook our competition in the online space. Brick-and-mortar casinos are still learning the full potential and importance of online gambling.”

With more of a dependence on traditional gaming, Cambodia is looking to increase slot machine revenue in particular, and casino revenues overall. Like China, Cambodia needs a government that develops and implements pro-gaming legislation and policies without extracting short-term revenues from casino properties.

“From our perspective, in Cambodia the Asian gaming boom can definitely be sustained,” says Gore. “This trend is related to the propensity of Asians to gamble and the continuing increases in regional gross domestic product (GDP) growth rates. Our forecast is that competition will continue to increase but that regional revenues will double within five years.”

The entire world will judge Japan when Tokyo hosts the Summer Olympics in 2020. Between now and then, expect the casino and gaming industry to continue to expand and welcome the world with open arms.

“Islamic Asian countries will have a significant effect on the future of the Japanese gaming industry,” says Kazuaki Sasaki, gaming consultant. “This is because the Japanese government is trying to attract citizens of these countries as tourists.”

“A larger, new gaming market will develop within Japan,” says Sasaki. “I think the audience and market share will be bigger than what most people expect.”

He does expect Tokyo to continue to be the center of strength for the country’s casino industry. Even Tokyo’s heavy presence ultimately relies on the actions and policies of China.

“The Chinese economic situation and stability will affect the Asian boom,” says Sasaki. “But a lot will also depend on Japanese casino laws, IR laws and the innovation of the Japanese gaming industries.”

Can the Philippines Fulfill Expectations?

Perhaps the “wild card” country in the future development of the Asian gaming boom is the Philippines.

“The optimists believe Philippine casinos can draw players from China, including the VIP room/junket player,” says Macomber. “The neo-conservatives believe it is a locals-only, or primarily locals market.”

The Filipino government has issued four gaming licenses and placed a billion-dollar development minimum on each to ensure the highest level of capital investment possible.

“The owners and developers must gamble that over a relatively short period of time the Philippine gaming industry can absorb a $4 billion investment, rather than right-sizing the projects at some lesser start-up critical mass and pace the growth as they boom and the market declares itself,” says Macomber.

The increase in the presence of gaming in the Philippines doesn’t necessarily equal automatic access to domestic players. For many of them, China is still the place to be.

“The opening of Resorts World Manila and Solaire Casino Entertainment in the Philippines had no effect on Macau’s performance,” says Andrew Klebanow, principal with Gaming Market Advisors. “As casinos open in countries bordering China, they will create new markets and serve populations that heretofore did not have convenient access to casinos. It can be argued that, as these populations are exposed to modern casinos, they will be interested in visiting Macau, much like the explosion of gaming in the United States’ regional markets stimulated visitation to Las Vegas.”

The Asian gaming boom has increased the momentum to expedite Taiwan’s gaming development. Efforts to legalize gaming in Taiwan began in the early 1990s, but it was not until 2009 that Taiwan took the first legal step to allow integrated resorts with casinos to be established on the offshore islands, a legislative effort attributed to the desire to recreate the success the gaming industry has brought to Singapore. Since then, the Taiwanese government has devoted significant efforts to develop gaming by establishing a legal framework.

“Under Taiwan’s Offshore Island Development Act, casino IRs may be established on Taiwan’s six offshore islands, but not on Taiwan island proper, if the local residents of the offshore island approve it through a referendum,” says Anita Chen, managing director for Park Strategies in Taiwan. “So far, such a referendum has only been approved in Matsu, an island country off the coast of China near Fuzhou City of Fujian Province. The other offshore island group that is considered a popular spot for casino IRs is the island group of Kinmen, located off the coast of China near Xiamen City of Fujian Province. Kinmen County has not held a casino referendum yet.”

On May 2, Taiwan’s Executive Yuan (the cabinet) formally completed its review of the Tourism Casino Administration Act and submitted the draft to the legislative branch for consideration and approval. The legislative branch was scheduled to begin reviewing the draft gaming law in the session starting in September. If all goes well, the draft law is expected to be passed by the end of this year.

Once the law goes into effect, the Taiwan government will be able to announce a request for proposals for casino licenses for the offshore island country of Matsu by late 2013. By early 2014 it is possible that a winner of the casino license in Matsu can be selected. If the process goes smoothly, Taiwan could have its first casino IR by 2016.

“Taiwan’s future casinos on the offshore islands are eyeing Chinese customers,” says Chen. “Taiwan is much closer to eastern China than Macau or Singapore, and many Chinese are already very curious to visit Taiwan. Now that Kinmen and Matsu are being demilitarized, they need a new source of economic strength.

“They do not have major manufacturing or other industrial facilities, so tourism and gaming offer them a bright economic future,” she continues. “With close locations and cultural affinity, Taiwan’s Matsu and Kinmen islands are already popular with Chinese tourists and are expected to be very attractive for Chinese gamblers once casino IRs are established.”

The growing influence of Russia in the world’s economy is definitely reflected in the gaming industry, where it even is a factor in the Asian gaming boom. Eastern Russia has definitely carved out a niche in this market, but it is also susceptible to external factors for future success.

“The future of gaming in eastern Russia is dependent on a number of factors,” says Klebanow. “It is imperative that the regional government move forward with establishing a sound regulatory structure so that international gaming companies with licenses in multiple jurisdictions can feel comfortable entering this marketing without having these licenses threatened. You only need to look at the reaction of the New Jersey regulators to MGM’s partnership in Macau in order to understand how cautious gaming companies must be when exploring new markets.”

The Primorye region of Russia presents a unique development opportunity. The planned Integrated Entertainment Zone (IEZ) near Vladivostok will evolve into a regional gaming destination serving eastern Russia and the medium-sized cities of northern China (Harbin, Shenyang and Dalian), and offer a more convenient gaming destination to residents of South Korea and northern Japan. For most residents of this region, Macau is too far away and too hard to get to.

“The IEZ may eventually have a half dozen casino resorts,” says Klebanow. “While not on the scale of casinos in Cotai, they will offer gaming, lodging and resort experiences far closer to home. We forecast that the Vladivostok IEZ has the potential to generate US$10 billion in annual gaming revenue in 10 years, once properties are fully developed. That will be new market growth that will not cannibalize from Macau.”

Vladivostok has both history and a geographical boundary on its side because it of its ability to serve greater Beijing and three northeast Chinese provinces.

“These are feeder markets that are not really patronizing Macau to any great degree,” says Macomber. “Vladivostok is at least a good strategic opportunity and probably a good medium-market-sized opportunity. Only the future will tell if it has the potential to develop into a large market.”

In July, Lawrence Ho, son of casino gaming mogul Stanley Ho, announced that he is investing over $600 million in Russian casinos, a strong show of support that spans across the country and continent divide. In September, the Cambodian gaming giant, NagaCorp, confirmed it also will build a casino resort near Vladivostok.

“Lawrence Ho was the first international developer to enter into an agreement to develop a casino resort in the IEZ and he will not be the last,” says Klebanow. “As more casino companies become familiar with doing business in Russia and see the opportunity, they too will enter the market.”

The real-time analysis of the Asian gaming boom will continue to captivate the industry worldwide for years to come. While the boundaries between countries may be set, the ability to pull players from one area of Asia to another is still being defined.

“The critical generic question is, ‘Why should a Chinese player go to a certain country or venue instead of Macau?’” says Macomber. “And why should a third-party VIP room/junket owner operator divert a player from Macau to these other venues?

“If a company is going to be in gaming, it needs to be in Asia to participate in the growth primarily driven by China, but not inconsequentially by other Asian countries as well, individually, in groups and in aggregate. This is a big question that deserves a long answer over time.”