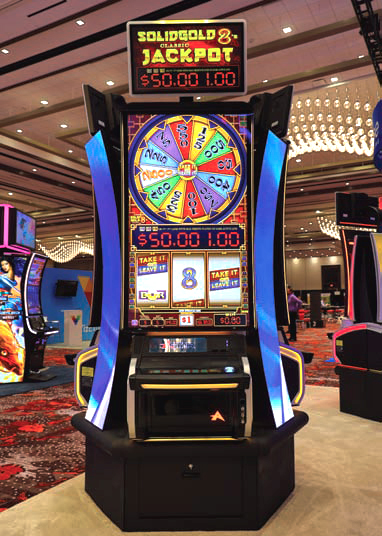 The new size of Ainsworth has arrived.

This gorgeous game package—complete with custom dynamic in-fill signage—debuted at the National Indian Gaming Association trade show in July. It will be front and center at Ainsworth’s Global Gaming Expo display in October.

The A-STAR Curve XL features the largest screen in the company’s history, and a 27-inch LCD topper. It’s the perfect package for a series of high denom linked progressive titles Ainsworth has built specifically for the cabinet.

Casino operators will appreciate the ease and simplicity of these premium cabinets. The hardware includes a front-facing lock and horizontal door for easy maintenance. Despite its large screen, the A-STAR Curve XL fits on a standard base at 26 inches wide and 27 inches deep.

The cabinet will debut in fall 2021 in several key slot markets, including California, Nevada and Oklahoma. The hardware has been approved by a third-party testing facility. Additional markets will be added later in the year.

The A-STAR Curve XL launches with a linked progressive game series called Take It or Leave It. This two-game family—Super Hot 7s Classic and Solid Gold 8s Classic—has been built to appeal to traditional slot players.

Each title is a three-reel multi-denomination package. Ainsworth recommends setting up games as $1/$5/$10 in a nine-line configuration with bet multipliers of 1-3-5. Other variations are also available.

Take It or Leave It is highlighted by a massive wheel, huge potential for wins, and a progressive jackpot that starts at $50,000 at the $1 denomination. Other games in the A-STAR Curve XL roadmap will also be showcased at G2E.