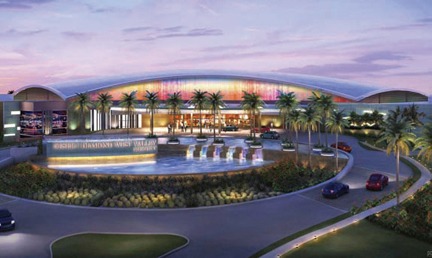 Testifying July 23 before a U.S. Senate committee, President Diane Enos of the Salt River Pima-Maricopa Indian Community accused the Tohono O’odham Nation of violating a “solemn promise” made 12 years ago to Arizona tribes and voters.

“They looked us in the face and lied,” Enos said of meetings that led to an agreement by 17 American Indian tribes not to pursue additional casinos in the Phoenix area. “They broke faith with us and the voters of Arizona.”

The promise to limit urban gambling was considered crucial to the slim, 50.9 percent voter approval of a 2002 ballot initiative and tribal-state compact that today gives Arizona tribes the exclusive right to operate 23 Las Vegas-style casinos.

But a year after the initiative passed, Tohono O’odham purchased land on an unincorporated island in the Phoenix suburb of Glendale. The tribe in 2009 announced its intentions to build a casino on the property. And the week of the Senate hearing Tohono O’odham signed construction bids for the first phase of the planned $607 million, 600-room West Valley Resort.

Montana Democrat Senator John Tester, chairman of the Senate Committee on Indian Affairs, pointedly asked Tohono O’odham Chairman Ned Norris Jr. if he promised tribes his nation would not pursue a casino in the Phoenix area.

“Can you tell me if that is true or false?” Tester asked.

There was rumbling in the packed chambers as Norris deliberately gathered his thoughts, clicked on the witness table microphone and thanked Tester for asking the question.

As Norris correctly pointed out, the nation has won several lawsuits and gotten U.S. Department of Interior approval to acquire and place in federal trust 54 acres of Maricopa County property for what may become the most lucrative tribal government casino in the country.

Federal judges and Interior officials concede the tribe did not violate the tribal-state compact agreed to in 2002 by Arizona tribes and approved by the voters.

But allegations persist that Tohono O’odham engaged in a legal but devious subterfuge in pursuing the project while other Arizona tribes and state officials were promising voters there would be limited gambling in the state and no additional casino development in the Phoenix area.

And there remains a nagging fear Tohono O’odham may attempt to relocate one or more of its three Southern Arizona casinos to the Phoenix metro area.

What many regard as a broken trust may reverberate for decades, seriously damaging tribal-state relations and, some believe, aggravating a growing, nationwide political and public backlash against the spread of Indian casinos off existing reservations.

“There’s a tendency to think this is only an Arizona issue,” said an Arizona tribal attorney. “Well, it’s not.”

Tribal leaders fear Arizona’s conservative legislature, angry at the notion Phoenix could become a “little Las Vegas,” may throw up their hands in disgust and urge voters to approve commercial casinos, which would generate more tax revenue than Indian operations.

There is also a concern that early renegotiation of tribal-state casino regulatory agreements, which technically expire in 2027, would result in demands for more tribal revenue in exchange for continued exclusivity. Tribes currently pay up to 8 percent of their revenues to the state.

“There remains poverty in all Arizona tribes,” Enos says. “The loss of gaming revenue would be devastating.”

Glendale Mayor Jerry Weiers, who remains opposed to the project although his council recently reversed its opposition to the casino resort, says, “If gaming happens in Glendale, there will be a strong effort in the Arizona Legislature to authorize non-Indian gaming in the state.

“That will have a devastating effect on all of our tribes,” he says.

Tohono O’odham officials claim opponents are exaggerating the potential fallout the West Valley Resort could have on tribal-state relations, noting support for the project from Glendale residents, nearby businesses and the surrounding communities of Peoria, Surprise and Tolleson.

The opposition, they claim, is being generated from a handful of Phoenix-area tribes with casinos—notably the Gila and Salt River Indian communities, but also Ak-Chin and Ft. McDowell Yavapai Nation—who fear a financial hit from a Glendale gambling resort.

Gila and Salt River tribal officials say the issue is more one of Tohono O’odham encroachment on their ancestral lands than competition with their casinos.

There also is a fear the Glendale controversy will spread far beyond Arizona’s borders.

Identical Senate and House resolutions to halt the project, some believe, could rekindle congressional opposition to Indian casinos which has so far blocked efforts to get a congressional “fix” to a 2009 Supreme Court ruling hindering Interior’s ability to place land in trust for tribal governments.

“I share the objections of many Arizonans when I see a casino being air-dropped into the metro Phoenix area,” says Arizona Senator John McCain, co-sponsor of the Senate version of what proponents have dubbed “Keep the Promise” legislation.

Arizona Democratic Rep. Raul Grijalva, whose district includes the Tohono O’odham reservation, bristles at legislative efforts to block a project that could create needed jobs and economic development, largely because of what he calls a “phantom promise.”

“The way I see it, we are essentially asking taxpayers to pay for special-interest legislation designed to protect East Valley tribes’ gaming markets, and the taxpayers would bear the full liability for that protection,” he says.

It was then-Congressman McCain who co-authored the Gila Bend Indian Reservation Lands Replacement Act of 1986, which would eventually enable Tohono O’odham to purchase property for the West Valley Resort.

The U.S. Army Corps of Engineers’ Painted Rock Dam project in 1960 flooded 9,880 acres of the tribe’s reservation, devastating agriculture and a tribal cemetery and forcing impoverished families onto a 40-acre tract of dilapidated homes in the nation’s San Lucy District.

The act provided the tribe with funds to purchase an equal amount of replacement property in “Pima, Pinal or Maricopa” counties, the latter of which includes Phoenix. The act states the land “shall be deemed to be a federal Indian reservation for all purposes,” which the courts and Interior later construed to include casinos.

Tohono O’odham completed a deal to buy the Maricopa County land in 2003, shortly after passage of the casino ballot initiative. The casino proposal was unveiled in 2009 and has survived repeated court challenges.

Kevin Washburn, Interior’s assistant secretary for Indian affairs, says the act mandated the agency place the land in trust for a casino, which it did in July.

Washburn calls tribal opposition to the project “one of the most agonizing parts of this whole process.”

“Ultimately, this was a legal question as to what was the meaning of the Gila Bend Act,” he says.

Tribal, city and state officials accuse Tohono O’odham of buying the property in secret, noting the tribe utilized a front company (Rainier Resources LLC) to acquire the land. Depending on which side is stating its case, this was a common practice in real estate transactions to keep the purchase price down, or an effort to deceive other tribes and local and state officials.

Opponents to the project have memos they say reveal a devious intent by Tohono O’odham to mask their intentions. Tohono O’Odham officials chafe at the accusation, contending tribes knew the Gila Bend act allowed the tribe to move into Maricopa County.

Portrayals of compact negotiations and what promises, if any, were made by Tohono O’odham is a litany of “he said, she said,” from which it is difficult, if not impossible, to ascertain the truth.

It is generally agreed Tohono O’odham did not give up its right under the compact to open a fourth casino, a concession other Phoenix area tribes agreed to in an effort to appease then-Gov. Jane Dee Hull and a conservative Republication legislature not enamored with casino gambling.

There also was an assumption a new Tohono O’odham casino would be near tribal land in the Tucson area, not Phoenix

“The major thrust of the campaign was to promise voters there would be limited gaming and no additional casinos in the Phoenix area,” Enos said of the $23 million ballot initiative. “We repeated this promise over and over again.”

Tribal leaders and Glendale officials were stunned in 2009 when Tohono O’odham announced its intention to build the West Valley Resort.

“I was blindsided,” Weiers says.

“The tribe went to great lengths to keep their plans secret from other tribes, local governments and voters.”

A subsequent multimillion-dollar lobby war spawned HR1410 and the identical SR2670, legislation intended to prevent new casinos in unincorporated Phoenix not contiguous to existing Indian reservations. The prohibition would remain in effect until compacts expire in 2027.

Tohono O’odham lawyers say enactment of the bills would constitute the first time Congress has reneged on a land claim or altered a tribal-state compact, setting a dangerous precedent.

They also say the pending legislation could be used by senators opposed to Indian gambling on newly acquired lands as a vehicle to amend the Indian Gaming Regulatory Act.  Those same senators oppose efforts to remedy the 2009 Supreme Court ruling in Carcieri v. Salazar, which hinders Interior efforts to place land in trust for tribes.

Project supporters contend it would be wrong to lump the Glendale project into the off-reservation controversy. In 26 years only one other tribe, the Wyandotte Nation of Oklahoma, has opened a casino under IGRA’s Section 20 land claims exemption.

“We want to do this in a fair way that does not cause a detriment to any other tribe in the country,” she says. “That’s why the language of (HR1410 and SR2670) purposefully avoids IGRA, is a temporary restriction and protects tribal sovereignty.

“We don’t want this issue to be used as leverage for larger discussions and debates on Carcieri and off-reservation gaming,” Binney says. “But obviously, many members of Congress and attorneys general are watching what is going on in Arizona and are wondering if it could also happen in their states.”

Norris bemoans the tens of millions of dollars his tribe has spent lobbying local, state and federal officials, money he says could be providing health care and homes for the nation’s 32,000 largely impoverished citizens.

McCain says he hopes tribal, municipal and state officials can work together and resolve an issue that “has caused so much controversy and difficulties” in Arizona.

But sources are skeptical that tentative overtures to mediate the issue will prove successful.

“This is a problem that only Congress can fix,” Enos says.