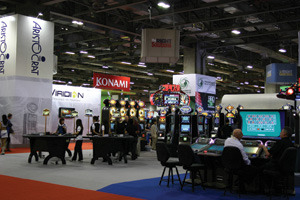 An estimated 6,000 gaming professionals from around the world converged last month on the Venetian Macao resort in China’s Macau Special Administrative Region for the second edition of Global Gaming Expo Asia.

G2E Asia tripled in size over last year’s inaugural event, featuring 175 exhibits in the new Venetian’s massive exhibit center. A three-day conference accompanying the exhibits focused on challenges and opportunities for casinos in Macau and the surrounding Asia-Pacific market.

Many of the issues addressed in seminars and workshops over the three days of the conference were summarized on the event’s first day, when Frank Fahrenkopf, president and CEO of the American Gaming Association, presented results of the first survey in the “G2E Asia Future Watch Series.”

This is the G2E Asia version of a survey that has been conducted by G2E for five years. Basically, it involves a research team from AGA and G2E polling executives from Asian casinos and companies that do business in Asia on a number of topics. For each topic, respondents are asked to evaluate the industry’s future, looking five to 10 years down the road.

Among the results highlighted by Fahrenkopf:

• Asia will soon surpass the U.S. in gaming revenue, and Macau will be the leader.

• Diversification in the form of non-gaming amenities will be critical in Macau, just as it has been in the U.S., where gaming revenues have gone from 70 percent of overall income to just 40 percent over the past decade.

• Among the challenges to Macau’s growth brought out in the survey were infrastructure improvements, a shortage of labor, and the finite space available on the island. Fahrenkopf also noted the expansion of gaming to new jurisdictions in Asia as a potential challenge, but said the survey respondents feel, as he does, that the Las Vegas model is instructive here. Las Vegas survived new competition first from Atlantic City, then from California Indian casinos, Mississippi riverboats and elsewhere, by redefining itself as a new center of dining, entertainment, shopping and other resort amenities. Fahrenkopf predicted the same will be true of Macau, and that just as in the case of Las Vegas (and now, Atlantic City, as Pennsylvania casinos take hold), the existence of new gaming jurisdictions will actually help Macau by creating new customers who will want to see the Cotai Strip after it is built out.

• Slot machines, which currently account for only 5 percent of gaming revenues in Asia (compared with 65-75 percent in the U.S.), will gradually gain more prominence as new technology takes hold that makes games more interesting.

The slot issue also was addressed at a press briefing by Marcus Prater, executive director of the Association of Gaming Equipment Manufacturers, or AGEM.

Prater acknowledged that growing the slot market in Macau is going to be a long process. While survey respondents said it would take at the very least seven years for slots to even approach table games in popularity in Macau, Prater predicted it could take much longer.

Slot operations officials voiced similar opinions at a panel discussion on the subject. Most of the casino floors are covered with baccarat tables, which is “part of the Chinese culture,” said Matthew Ballesty, general manager of casino planning and development for Crown Casino Macau.

Lindsay Stewart, vice president of electronic gaming for Sociedade de Jogos de Macau, added that the Chinese love of baccarat and other tables means floor space is a barrier to the addition of slots. “Every floor only has a certain amount of premium space,” Stewart said. “It is difficult to get the space you need for slots. Your game selection has to be all the sharper.”

The panel had advice for the slot manufacturers on that game selection: it must be customized for the local market. “Listen to operators,” said Peter Johns, director of slot operations for MGM Grand Macau. “Don’t try to dictate what will work. What works in other jurisdictions may not work here.”

Stewart added that most of the slot manufacturers understand this, and have adapted many more of their new games to the Asian market. “A lot of people tried to sell me a lot of junk five years ago,” he said. “There was a time when we couldn’t even get a game translated into Chinese. However, now, there is a lot better mutual understanding; the manufacturers are pretty much on board, and it is a lot easier than it was.”

During a panel on Asian casino design, experts stressed that while they consider concepts such as feng shui, the traditional Chinese ideas on building layouts and design, when you get right down to it, an Asian casino is more likely to resemble one in Las Vegas than anything else.

“You don’t see any difference in design in Asia for things like post offices, restaurants or hospitals, so why should a casino be any different?” asked Joseph Goodwin, project manager for the Venetian Macao.

Philip Payne, an associate with the CSI Group, and someone with vast experience in Macau design, said every project is different because they often try to appeal to different markets.

“At one casino, we simply built a shell for the casinos because they wanted to allow the VIP operators to design their private gambling rooms.”

Brad Friedmutter, CEO of the Friedmutter Group, said he tries to design to the desires of the casino owners.

“We may have our ideas about how a project should look,” he says, “but if the client is very insistent, we’ll go with what he wants.”

Floss Barber, CDO of Floss Barber Inc., said the concept of feng shui is very important when considering how to lay out the gaming area.

“It’s very important not to interrupt the energy of the place,” she says. “Asian gamblers are very superstitious so you have to know all the cultural nuances before you begin to design.”

One controversial topic covered at G2E Asia was VIP operations, which dominates the Macau gaming market, producing around 70 percent of the revenue. Some questioned whether that was healthy in such an important market.

“The owners of the Venetian would never have spent $1.8 billion if they had known the VIP market would not change,” said one Macau executive. “They would have spent $300 million on a very nice casino, like Crown Macau, and spent the rest on acquiring the best junket reps that money could buy.”

But most agreed with more “mass-market” casinos like the Venetian slated to open in the next two years, the VIP market is destined to shrink a little, but that the VIP segment would always remain important.