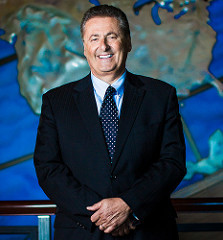 Felix Rappaport, a former Wynn and MGM executive, was appointed president and CEO of Foxwoods more than two years ago. Since that time, Foxwoods has improved its financial performance and backed away from the fiscal cliff it was approaching. He spoke with GGB Publisher Roger Gros at his offices in Foxwoods in August.

What did you do at Foxwoods to right the ship?

First of all, I don’t want to take credit for “righting the ship.” It’s been a team effort. But I know that my predecessor, his team, the tribal council and tribal Chairman Rodney Butler spent thousands of hours working with our lenders to create a more stable financial environment.

What I’ve focused on since I’ve been here is to rebuild the executive committee, bring in a creative marketing team and work with our lenders to have not only a good story to tell in terms of better operations and better financial results, but also to have a viable five-year strategic plan for the future.

What areas needed more attention than others?

It’s kind of counterintuitive, but one of the reasons I was so optimistic was that there was room for improvement in virtually every area of our business. And I don’t say that to disparage anyone who came before me; it’s not my style. My style is to build on the foundation of what came before. And we’ve built a team that is one of the stronger if not the strongest of any that I’ve worked with in all my years in the business.

Tell us about the impact of the Tanger outlet mall that opened last year.

It’s the only fully enclosed, fully climatized Tanger outlet mall in the world. This is the only one that is part of a casino, and for those who think an outlet mall has to be tacky, it’s the complete opposite. It’s a beautifully designed, 80-store facility, and continues to gain traction. The visitations continue to grow, and it really gives Foxwoods a tremendous competitive advantage over any other casino in the region.

The Plainridge Casino just opened in Massachusetts. What kind of impact has that had on your property?

Penn National is a very good regional operator, and a large part of our market comes from Massachusetts, so you have to have a very compelling message to get your customers to travel further. If you just want to gamble and you have a place that’s five minutes away, that’s where you’ll go. But if you want the things we have to offer—38 restaurants, 300 shows a year, golf, spa, shopping and more—you’ll come to Foxwoods. So we haven’t felt that much of an impact.

With the upcoming integrated resorts in Massachusetts and New York, is gaming over-saturated in the region?

That’s not a word I like to use. The world is competitive and organizations that evolve stay competitive, survive and thrive. And organizations that do not evolve don’t have much success. So it’s my job, my team’s job, the tribal council’s job, to figure out what we want to be when we grow up. We’re about to celebrate our 25th anniversary next year in February, so we have an abundance of resources and facilities—we’re the largest casino resort complex in North America. If we stay static, we’ll be less successful. If we build on our natural foundational elements and add to that, in my opinion, we’ll continue to thrive. It will be much more of a balance between gaming and non-gaming that we have traditionally enjoyed.