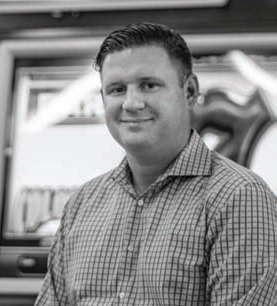 The emergence as an industry leader in slot manufacturing of AGS has been remarkable. Andrew Burke, the vice president of slot products for the company, has seen it all. He explains the strategy of the company and the products that he believes will make a difference for AGS in 2017 and beyond. He spoke with GGB Publisher Roger Gros from the AGS offices in Las Vegas in November.

GGB: You’ve been with AGS now for eight years, so you’ve seen a lot of changes. What has been most important?

Andrew Burke: Almost all of them! It’s been a tremendous ride. I started working with the owners of the company, Alpine Investors; that’s how I got involved. The vision for the company at that time was what it has become today. We just didn’t know how long it would take and what it would take to get there. We struggled with operations, R&D, almost all aspects of the business. But when we were sold to Apollo and they brought (CEO) David Lopez in, that’s when it began to change. He made a lot of hard decisions pretty quickly. And this is why I stayed; this is what I always hoped it would be.

AGS was known as a quality Class II company with route operations in Illinois and sales/leases in Oklahoma. Now that you’re a player in the Class III market, how important was that move?

It was extremely important. We’ve always known how to build great Class II products, but building and launching Class III products is another ballgame. So to have success doing that is very gratifying. Our Class II business is still very large and very important to us, but to have a growth platform like Class III is really engaging.

How will you divide your games between Class II and Class III?

We’re going to build every game in both Class II and Class III versions—anything that we can, of course. In some games, there are math limitations that make it work for one or the other, but our goal is to deliver quality games on both platforms.

What is your view on themed games?

Well, we did Ripley’s and Family Feud, and we learned a lot from them, but we haven’t done much recently. We are starting to look at some opportunities again. It’s an area of exploration for us in the next couple of years.

The economics of these games are really hard. For us, as one of the smaller companies, every dollar we spend on R&D is gold. So we really want to maximize the value. It’s hard to justify these big price tags that some of these brands want.

So you’re focused on proprietary games developed by AGS?

Yes, and we’re laser-focused on the high-value gamblers that might make up 5 percent of the player base but contribute at a much higher rate. Our team is thinking about those people every day—the themes they like, the mechanics they like, the payouts they like. We’re developing product directly for those players, and we’ve seen some great early success. It’s a very competitive space, a smaller footprint, but we’re seeing the games we develop are really hitting our mark. And we’re just getting started!