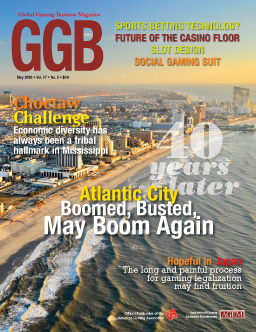 When casinos were first floated as a way to revive the fading shore town, Heneghan was a reporter for the Press of Atlantic City. He was there 40 years ago, when Resorts Atlantic City opened. He saw the mobs who stood in line for hours to get inside the town’s first legal gaming hall. He eventually worked the newspaper’s casino beat, and he’s still around, as public information officer for the New Jersey Casino Control Commission.

Throw Out the Lifeline

Few remember today that New Jersey gaming was originally conceived as a statewide industry. That plan that was nixed by voters in 1974, but when the legislation confined casinos only to Atlantic City, the referendum passed. Everyone knew the city needed a break.

“Atlantic City was down and out,” says Heneghan. “There was a joke at the time that if the casino referendum failed, the last one over the bridge could turn out the lights. The city was a shambles—slums with an ocean view.”

Though the shore resort still sputtered to life during the summer, it emptied out after the Miss America pageant in September.

“There would be virtually nothing open all winter,” says Heneghan. “The city was clinging to life, hoping against hope that something positive would happen.”

That something was casinos. The Committee to Rebuild Atlantic City (known, without irony, as “CRAC”), promised an experience totally unlike Las Vegas, with “continental-style casinos patterned after those in Monte Carlo and the Caribbean,” and nary a slot machine in sight.

“They created this impression of James Bond-type casinos with ladies in evening gowns and men in dinner jackets, making bets in French,” says Heneghan with a laugh. As everyone knows, what Atlantic City got was “enormous gambling halls chock-full with slots and tables, with people in T-shirts and jeans shoving each other.

“There was a glamorous aspect to it,” says Heneghan, “but it was also mass pandemonium with these intense crowds. You heard more than one tale of a gentleman who refused to leave the blackjack table when nature called, because he didn’t want to lose his seat.”

The casinos could not empty their slot machines fast enough, he says, and the soft count took 23 hours to tabulate. The city was almost literally rolling in dough.

Steve Norton wasn’t surprised. An executive with Resorts International, which had developed casinos in the Bahamas and the Caribbean, Norton was shipped north to check out Atlantic City’s viability as a casino market. He found pent-up demand for gambling that convinced him the idea was a sure bet.

“Adding lottery and racetracks, there was more money being wagered in New Jersey, New York and Pennsylvania than in California, Arizona and Nevada,” says Norton, who eventually became executive vice president of Resorts International in Atlantic City. “When the racetracks in New York City closed down, there were 30 buses a day running from Manhattan to Charlestown, West Virginia, taking people to the track.”

At the time, Caesars and Bally’s (then MGM) were tops in Vegas, generating about $80 million each per year. “When I told the New Jersey Casino Control Commission that we would exceed $200 million in the first year, they thought I was nuts,” he says. “We took in $245 million.”

The gold rush was on.

“There was this incredible euphoria,” says Heneghan. “It knocked the sense out of a lot of people, who thought the streets would be paved with gold.”

Within 13 months, the city’s second casino, Caesars Boardwalk Regency, had opened, followed by Bally’s Park Place. By 1981, there were nine casinos on the Boardwalk. Then the industry sputtered.

“You went from a place where you couldn’t count the money fast enough to the fourth quarter of 1981, where every property lost money,” says Heneghan. “Supply had grown much faster than demand.”

Bus marketing helped. Under that program, which started at Resorts, up to 1,000 buses a day packed with happy gamblers rolled in from Philadelphia, North Jersey, New York and Baltimore. The day trippers got a free ride, a roll of quarters, and sometimes a buffet. They helped the casino industry continue to expand.

In 1980, Harrah’s was the first casino to open off the Boardwalk, in the city’s Marina District. Tropicana came next. The Trump era began in 1984. Eventually, the T-word was emblazoned on three gaming resorts in town: Trump Plaza, Trump Castle (later Trump Marina), and finally, the $1 billion Trump Taj Mahal in 1990, called “the eighth wonder of the world” by the hyperbolic business mogul.

When the Borgata opened in 2003, its sparkling gold tower, Dale Chihuly glass sculptures and upscale experience made the schlock-heavy Boardwalk casinos look a little tired, but those properties soon stepped up their game.

For 28 straight years, from 1978 through 2006, casino revenues grew every year. It seemed the casino industry, like the housing market, just could not lose.

In 2007, four new casinos were planned for Atlantic City, representing a total investment of $9 billion. As late as November of that year, a giddy report from NBC News said, “By 2012, you might not even recognize this place.”

That’s when the hammer hit. The Great Recession coupled with new Pennsylvania casinos brought the gravy train to a screeching halt. Three of the four new casinos were shelved, four of the existing casinos closed, and more than 8,000 people lost their jobs.

The only casino completed at the time—the $2.6 billion Revel, which was scaled back from two towers to one—opened behind schedule, closed inside two years, stood vacant for a while, and then was bought for pennies on the dollar by a Florida developer.

Glenn Straub’s wacky plans for the property, which he renamed Ten, included an recreational center with “frozen mountains, half pipes and motocross tracks,” charity mud runs featuring “girls in pink tutus,” rodeos, and a cryotherapy chamber, a la Michael Jackson. At various times, Straub announced that Revel would become an academic institution for geniuses and a sanctuary for Syrian refugees.

Thankfully, Straub is now part of Atlantic City’s colorful, turbulent history. In January, he sold Revel-slash-Ten to a Colorado investor who plans to reopen it as the Ocean Casino Resort. That should coincide with the reopening of the former Trump Taj Mahal as Hard Rock Atlantic City. The eight casinos that survived the recession are once again making money, and the state’s online gaming industry has helped fill the coffers too.

There are concerns the new properties will sound the death knell for weaker properties in town, but for the first time in a decade, the forecast for Atlantic City looks mostly sunny. According to a 2017 article in USA Today, the city, “left for dead for the last 10 years, is having a revival.”

In that article, the late state Senator Jim Whelan, mayor of Atlantic City from 1990 to 2001, summed it up when he said, “Atlantic City is like Dracula—you can’t kill it, no matter how hard we try.”

Joe Kelly, president of the Atlantic City Chamber of Commerce since 1997, says the city has proven its hardiness, and also learned its lessons. “For 30 years in Atlantic City, every year was better than the last—that’s a really long period of time to grow,” says Kelly. “When gaming was added to other jurisdictions, the demand dropped and we went through that adjustment period. We improved our product. We added to it. We’re coming back.”

The city’s new mayor, Frank Gilliam, agrees. “As online gaming continues to grow with sports betting, I see the gaming industry thrive in Atlantic City as it’s done for 40 years. The new casinos set to open in Atlantic City can only continue to enhance the gaming landscape.”

Former New Jersey Superior Court Judge Steve Perskie, author and principal sponsor of the original New Jersey Casino Control Act, says Atlantic City’s future “is not dependent on how many new casinos there are. There have to be other reasons for people to come—shops and restaurants and nightclubs. It’s my hope that, over the course of next 10 years, the state makes a significant investment in terms of promoting Atlantic City. It’s always been a spectacular site for conventions and meetings, and while the facilities are first-rate, the marketing is not.”

Norton believes the biggest key to a resilient marketplace is more and better commercial air service to and from key cities like Atlanta, Houston and Dallas.

In retrospect, with all the ups and downs, with pockets of poverty still blighting the town, and with the seesawing nature of the gaming industry, have casinos proven a good bet for Atlantic City?

“The answer to that—as it was in years 10, 20 and 30—is yes, without a doubt,” says Perskie. “Atlantic City would be off everybody’s radar, it would have disappeared from a commercial point of view, if not for the fact that the people of New Jersey chose to legalize gaming 40 years ago.

“While indeed the experience of Atlantic City in the last 10 years has been difficult, the words of Mark Twain come to mind. Reports of Atlantic City’s death are greatly exaggerated.”