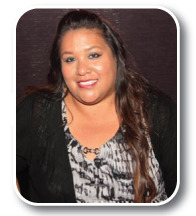 Leslie Tanyan was born and raised in Oklahoma City, and earned her B.A. from the University of Oklahoma in business administration and her M.B.A. from Oklahoma Christian University.

In 2005, Tanyan began her career in the gaming industry with the Iowa Tribe of Oklahoma (ITO) as a gaming commissioner, and in 2009 she became the executive director of ITO Gaming Commission. In addition, Tanyan has worked at the Absentee Shawnee Gaming Commission and Seminole Nation Gaming Agency.

Tanyan’s path in gaming has led her back to the Absentee Shawnee Gaming Commission, where she is currently executive director. “The fast-paced nature of gaming,” she says, was what originally made the industry attractive. She liked that there was something new to do every day, and there is never a dull moment.

Following her time as executive director, she ran for tribal office and served the ITO as tribal secretary. Tanyan notes that the decision to run for tribal office had the largest impact on her career. The position itself bestowed a great deal of responsibility on her from the tribal people to ensure that the programs she oversaw were run with accountability and transparency.

Her responsibilities were enormous, but during her time as tribal secretary she, along with her fellow Business Committee members, was able to accomplish a great deal. They renovated the existing Cimarron Casino, and built the new Ioway Casino and a new Travel Market with casino.

Additionally, they increased their tribal assistance programs from revenue that was generated from the tribe’s enterprises for their tribal members. During this period, she worked with the general manager and chief financial officer of the casino, which gave her a better understanding of the operational side of a casino—knowledge that Tanyan utilized to become a better commission director.

Tanyan is extremely proud of the progress she has made in the gaming industry, and believes that her ability to communicate and be eager to learn each area of the Gaming Commission enabled her to move up to the executive director position.

Tanyan says she strives to create a positive atmosphere of teamwork to better protect the assets of the casino. For young and upcoming professionals who are looking to move up the corporate ladder, Tanyan’s advice is “learn and never give up.”

“By setting goals and the steps needed to accomplish them, young professionals can achieve their career aspirations,” she says. “Your career path is like a business plan. You outline what you want and how you are going to achieve it, but just remember, sometime plans change, and having flexibility is important.”