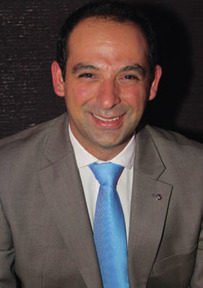 Trevor De Giorgio got into gaming by way of law, and by way of a European law master’s thesis at the University of La Sapienza in Rome that dealt with changes in European gaming law—including key judgments that allowed operation across Europe for any licensee of one European jurisdiction.

The changes led to expansion of the online gaming business in De Giorgio’s native Malta, which is what led him back to the island first as a regulator, and ultimately to his current job as managing director, Malta, for Greentube, the online gaming arm of Austrian gaming giant Novomatic Group.

De Giorgio joined Greentube with impeccable timing, three months before Novomatic acquired the online gaming system supplier in 2013. Since then, he has grown Greentube Malta from five people to 40, servicing both B2B and B2C business.

At the same time, he has served as head of compliance for the Greentube Novomatic subsidiary—a capability De Giorgio brought to his position from the regulatory side.

After receiving his M.A. in European law in Rome and his LL.D. from the University of Malta, De Giorgio was working in a Malta law firm when he was named to the Maltese Lotteries and Gaming Authority (LGA), where he set up an E.U. affairs division within the industry regulator. De Giorgio drafted the LGA’s position on a number of European Issues, remaining at the agency a year and seven months before accepting the Greentube position. (“As I was told, I moved to the ‘dark side’ and joined an operator,” he laughs.)

As Greentube’s managing director for Malta, De Giorgio, 35, oversees the company’s development not only on the online side, but in relation to the Novomatic land-based content business as well.

“We supply Novomatic-branded content, which we deliver online to a number of our clients who are Malta licensees—but also, we use the current regulatory structures in Europe, whereby we get licenses to offer the games ourselves directly on a B2C level,” he explains. “We offer our product in Italy with our Star Vegas brand; we’re going to be offering it in Spain and other jurisdictions as well.”

De Giorgio says he is embracing the challenge of being part of the enormous operation that is Novomatic. “Almost every day, there is something new to do,” he says.

“When you work for a company that is owned by Novomatic, we’re so big that challenges come from a number of different areas. We’re the online part. Sometimes it’s a land-based project. There could be compliance issues related to the overall operation of the group. If there is an online issue, sometimes I get involved. So, that’s given me another view to the sector—I had been exclusively online.”

He adds that his legal and regulatory background have helped Novomatic navigate the changing European regulatory landscape—as he says, “trying to find the market where regulation makes sense, to go in an operate—that’s part of my job.”

As far as mentors, De Giorgio credits Joe Borg, former LGA chief regulatory officer, and the CEO of the regulator, Reuben Portanier. Borg “gave me free reign to get my job done, but he let me do it my way, which is brilliant,” De Giorgio says, adding that Portanier “had the same sort of mentality.”

At Greentube, De Giorgio gives credit to Novomatic COO Eberhard Dürrschmid, the CEO of Greentube when he arrived, and Novomatic CEO Thomas Graf. “I wouldn’t be here if it wasn’t for (Dürrschmid), for the company, and for Novomatic, especially Thomas Graf, for believing in me.”

These days, De Giorgio splits his time between Malta and his young family (wife Adela and year-and-a-half-old daughter Giuliana), and Vienna, where he spends a week per month working on compliance issues for Greentube.

“One my father gave me—If you make a mistake, own up,” he says, “because if you try and hide it, it’s only going to become bigger. Being honest pays off. Secondly, you work hard. Work hard, do your job, get the results.

“And,” he adds, referencing that young family, “don’t ever forget where you come from.”