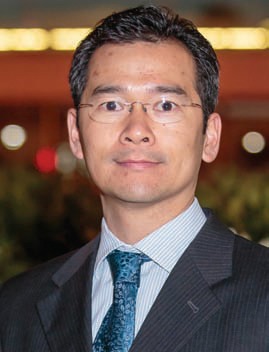 As a statistical analyst and former corporate fixer for Carl Icahn, Andy Choy has a surprisingly pure take on his role in the gaming industry: “We’re in the business,” he says, “of bringing joy to our customers.”

“Our customers save up all week, all month or all year to spend a little time in our facilities, to get away from their worries and daily routines,” says Choy. “Our business is unique in that we provide patrons with authentic winning experiences and the euphoria that comes with them.”

The former president and CEO of the Las Vegas Riviera, who joined Melco Crown as chief gaming officer in April, didn’t plan on a career in gaming. After earning his MBA at Stanford, he worked briefly on one of Sir Richard Branson’s few failed business ventures (Virgin Cola, anyone?), then signed on with Icahn to turn around distressed assets in the manufacturing sector.

“After a particularly grueling assignment,” Choy recalls, “I was asked to develop strategic options for American Casino and Entertainment Properties. I learned the ins and outs of the industry, and I fell in love with gaming.” He’s racked up an impressive CV, serving as manager at the Venetian Las Vegas and as a senior VP at the Venetian Macao. He credits legendary Sands boss Rob Goldstein for guiding him along the path.

“Watching how Rob’s able to inspire and motivate everyone around him has really shaped me as an executive,” says Choy. “He recruited me to LVS after the ACEP sale, sent me out to Macau in 2008, introduced me to the opportunity at the Riviera, and recently helped me to decide to move back to Asia.”

Though his stint at the Riviera ended ingloriously—Choy was ousted in June 2013, as the aged property continued to shed revenue—he’s sanguine about his departure. “The situation wasn’t nearly as scintillating as the media made it out to be. I spent three years executing (a redevelopment plan) when the owners decided to change course and not reinvest in the property. Given the change in direction, it was a win-win for everyone.”

From Choy’s perspective, the biggest challenge facing the industry is saturation and over-capacity; after all, it’s still a numbers game. “The vast increase in supply has had a disastrous effect on profit margins. We need to figure out the appropriate investment for given jurisdictions and limit growth so as not to destroy the fundamental economics. The main difference (with) Melco is that it’s only working in jurisdictions with limited supply. ”

His advice for operators? “Experiment as much as possible while avoiding large capital outlays. When I left the Riviera, I started a cloud-based mobile marketing platform for casino operators to address this very issue. I basically designed the product I wish someone would have sold to me while I was at the Riv: simple, effective and affordable. With so much new technology out there, you can spend a fortune with nothing to show for it in return. Casino Offer Network is priced as shareware: casinos only pay if they are completely satisfied with the results.”

And his advice for newcomers? “Be curious. The fascinating thing about gaming is that there are so many different disciplines—marketing to hospitality to entertainment to development to technology and on and on. The more diverse your experiences, the more opportunity you’ll have to contribute.”

Oh, and don’t forget to spread the joy.