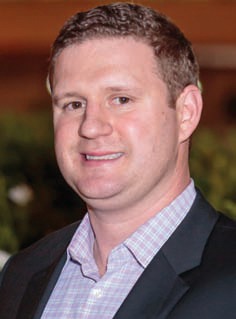 The pivotal moment in the career of Andrew Burke came when he was queried by one of the giants of the slot industry, Bob Miodunski, who said:

“You either want to be a gaming guy or a private equity guy. Which is it?”

AGS Chairman Graham Weaver had lured Miodunski out of retirement because he needed a gaming pro to take the slot-maker, already successful in Class II markets like Oklahoma, into the traditional Class III casino markets. Burke, meanwhile, had become a quick study on the gaming industry after he was assigned to the newly acquired AGS.

“I was an analyst; my job was to help find new acquisitions, help complete those acquisitions, and then help streamline company operations,” Burke recalls. “I started working on projects related to AGS almost the first day I walked in the door at Alpine.”

By the time Miodunski began building what would become one of the more enviable management teams in gaming, Burke’s answer to the new CEO’s career question was easy: He wanted to be in gaming. Miodunski told him to move to Las Vegas and join the team, and Burke has never looked back.

Burke liked gaming so much, in fact, that he wanted to dig much deeper into AGS than with the business-development roles he had played while in San Francisco. When Jamie Papp, the former director of product management and performance, left for Caesars Entertainment in 2012, Burke jumped at the job.

“They said I didn’t know enough about that position; I said just give me a chance. They gave me a chance.” Miodunski later told him “he couldn’t be prouder of what I had done with it.”

By the time Miodunski re-retired and David Lopez became CEO, Burke was well-entrenched on the product side of the business. Lopez promoted Burke to vice president of slot products.

One of those business developments would be the acquisition of Colossal Gaming, which Burke directed. Colossal would add its particular brand of oversized slots and quirky games to the Roadrunner platform now bearing fruit for AGS in Class III markets, and would add a new game design force to the company in Colossal cofounder and former CDS chief Steve Weiss, himself a legend in the casino supply sector.

Burke names Weiss, with whom he dealt and interacted long before the acquisition, as his most important gaming mentor. “He challenges me to think differently about product strategy, about strategy in the business, every day,” Burke says. “I just really love his passion and the way he thinks about things.”

He also names Miodunski, along with Lopez and current AGS COO Ken Bossingham—another slot veteran—as important mentors. “I’ve been fortunate to have really a great group of mentors all through the AGS channel,” says Burke.

“Never say no. If somebody offers you an opportunity to do something, even if it’s not really in your role, do it, and do it absolutely to the best of your ability. And be a sponge. Learn everything about it.

“If you can never say no and always take the next challenge and try to learn as much as you can every day, you’re going to be in for success in any career.”