The outbreak of the Coronavirus has had a major impact on the gaming industry. With this in mind, GGB is committed to providing updated news and analysis on our weekly news site, GGBNews.com.
Global Gaming Women at G2E 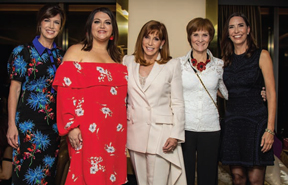 The annual Kick Up Your Heels fundraiser has become a revered event in the gaming industry as it raises funds to support the Global Gaming Women organization as well as its Charitable Education Fund that provides women with educational scholarships to help advance their professional careers.

Along with raising funds, the event also celebrates a select group of women in the industry with the Patricia Becker Pay It Forward Award. The award is given to those who have committed to the development and advancement of women, GGW, and their community.

This year marks the event’s 10th anniversary, and will take place on Wednesday, October 16 from 6 p.m. to 8 p.m. at the Wynn Resort Las Vegas. Tickets will be available at GlobalGamingWomen.org.

The 2019 Patricia Becker Pay It Forward Awardees are:

McKissick is a 2017 W Development Class graduate, a Western Regional Education subcommittee member, and has hosted numerous Dine Around dinners for both the leadership and development conferences. In addition to her work with GGW, McKissick started a Leadership Circle for women in Global Supply Chain in 2017, and most recently help found the first Leaders Engaged in Authentic Development (LEAD), an Executive Women’s Leadership Circle within Aristocrat Technologies.

Ryan is a 2015 W Development Class graduate. In 2016 and 2017, she served on the Southern Regional Educational Committee, and then in 2018 Ryan became the co-chair for the Education Committee, where she oversees both the Southern and Eastern Regional Committees. In addition to her work with GGW, Ryan is an inaugural member of the leadership team that launched the Women of Seminole Gaming mentorship program. And she also serves on the board of Junior Achievement of South Florida.

Perez attended the first regional Leadership Class in 2015, and since then she has become an enthusiastic advocate for GGW, where she has hosted numerous Dine Around dinners and led the initial “Power Of” conference. In 2018, she hosted the Western Front-Line Managers Program. Perez also participates as a member of the Western Regional Education Committee.

Roberts has acted as general counsel for GGW for two years, attending board meetings, formalizing the minutes and assisting in the legal responsibilities of GGW. In addition, she has been part of the Kick Up Your Heels fundraising committee, and has recently joined the Education Committee.

Topham is a 2015 W Development Class graduate and is currently a member of the GGW Marketing Committee. She recently hosted a Western Leadership Development Dine Around dinner. And in 2018, Topham was honored as one of the “40 under 40,” influential young men and women working to make Las Vegas a better place.

Wofford is a 2015 W Development Class graduate and has participated in numerous GGW committees in her capacity with Aristocrat and Caesars Entertainment, and as she has transitioned to opening her own company. She is currently a member of the GGW Marketing Committee and has supported video production for GGW events and marketing for Kick Up Your Heels, in addition to leading a GGW Lean In Circle.

Each of these women has lent her individual talents to make a difference to support the goals of advancing women in leadership within the gaming industry.